BiblioWorks was created in 2005 by a former American Peace Corps volunteer in Bolivia, Megan Sherar, and her brother. They fell in love with the country and decided to address the inadequate infrastructure interfering with Bolivia’s access to some of the most critical things on earth: literacy and education. Literacy and education are the first steps towards progress for every community in every country around the world.

Today, this non-profit organization is managed in Bolivia by a team of dedicated Bolivians who understand the needs of both the organization and each individual library. The local team also helps BiblioWorks stay connected with the various communities to make the libraries lively and useful; they work closely with the local authorities to focus on the needs that people express in every community in which they intervene. After more than ten years of dedication, BiblioWorks is proud to run a network of fourteen libraries in the city of Sucre and in the surrounding countryside.

BiblioWorks is convinced that literacy and education are best spread by a fruitful exchange among cultures, identities, and origins; and therefore welcome volunteers from all across the world to work with them in their varying libraries. It is a great way for people to share their differences and learn from one another. When a volunteer comes from another country, their stay in Bolivia is an opportunity to know more about a new culture and learn Spanish as well. It is also an amazing chance for the children to be confronted with diversity. 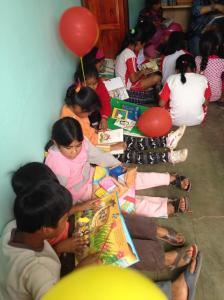 work with. For example, if a volunteer has some dance skills, they can set up a dance workshop. Additionally, as most of the volunteers are fluent in English they can provide the kids with basic English lessons. Often, what is considered simple or usual for a volunteer can have a great value for a child and can genuinely impact their lives. When volunteers come from abroad to BiblioWorks’ libraries, everyone benefits from the experience.

The BiblioWorks libraries would not exist without the plurality of actors that participate in the life of their organization; from the board in the United States to the team in Bolivia, from the volunteers coming from across the globe to the kids attending the libraries.

If you are interested in donating to BiblioWorks or participating in a volunteer trip to Bolivia, search for them on UniversalGiving.

“Girls are 50% of the population. We deserve to represent 50% of the heroes.”

Tamora Pierce is an author of young adult fantasy novels, and at the risk of sounding like I’m exaggerating, I can tell you that she changed my life.  Tamora Pierce writes books about strong women, or “sheroes.”

When Pierce was starting out in writing, there was (and to some extent, still is) a belief that books about boys were more marketable.  The theory goes that young adult girls will read stories about male heroes, but young adult boys won’t read about female leads—write about a boy and you have twice the market, meaning there weren’t as many stories about heroic girls, and not as many role-models for girls to read about.

But almost thirty years ago, Pierce wrote Song of the Lioness.  It’s a fantasy quartet about Alanna, a girl who desperately wants to become a knight, even though it’s a profession not open to women.  So Alanna disguises herself as a boy, and sets about to do it anyway.  She’s brave and strong, knows who she is and what she wants, keeps up with the boys and earns their respect.  It’s a wonderful story.  I read the books at a young age, and they made a huge impression on me.  Since then, I’ve read many other books about strong girls, and Pierce certainly isn’t the only author writing those characters.  But she was at the beginning of a changing trend, and she was one of the first to make a big impact with me.

I’m a firm believer that a girl can do anything a boy can do, that women should have the same rights as men, and that we all ought to be equal, whether in pay rates or in who cleans the house.  I’m sure a lot of that belief comes from my parents, especially my mom, but I think reading about Alanna at a young age helped.

I also know I’m not unique in this—off the top of my head I can think of three friends who were deeply influenced by Tamora Pierce’s writing.  Two of them I became friends with because we bonded over our shared love for her books (another way she changed my life!)

When I was a kid, I wanted to be Alanna when I grew up.  Now, I think I want to “grow up” to be Tamora Pierce, at least as a writer.

The world needs stories like Alanna’s, and Pierce’s other books.  We need stories that tell girls they’re as good as boys, that they can be strong and make a difference, that they don’t have to stay with their pushy boyfriend, that they can be themselves, whoever that is, and that they can achieve their dreams and do great things.  Boys need to hear some of that too, and Tamora Pierce’s books provide excellent role models of both genders.

We all need heroes who will inspire us to become heroes.  That may be the ultimate magic of Pierce’s books—she didn’t just tell me about a heroic girl.  She told me I could be one too.

We all can be—and we can help other girls achieve their goals too.  In one of her later adventures, Alanna joined a desert tribe, took two girls under her wing and helped them gain acceptance and respect—and learned from them too.  We can all help someone, a relative, a friend, or a stranger thousands of miles away.  Thanks to our increasingly global world, we can find opportunities to help all over the world.  We can send a girl to college, help a woman start a business, or volunteer with women in the developing world.

Or we can find a way to inspire someone else.  Has there been an Alanna or a Tamora Pierce in your life?  Have you gone on to help someone else?  I’d love to hear your story!

Cheryl Mahoney is a writer for Tales of the Marvelous, sharing book reviews and reflections on writing.  She has reviewed more than fifteen books by Tamora Pierce, and many others about strong and inspiring girls. She is the Senior Marketing Associate at UniversalGiving and a managing writer for PhilanthroPost.